During March my company applied their Corona work scheme which forced me to get up about 1,5 hours earlier than I was used to. And I hated this. Well, I still do. Because it is against my internal rhythm. I am just no morning guy.
So the first week I seriously had struggles to get into it. I was extremely tired an unconcentrated, had difficulties to focus. To make it short: I was almost useless.

But later I recognized the opportunities, too. Almost every second day off? Nice! Let’s see, what to do with it. The governmental rules have been clear. Whatever you do, do it alone and keep 1,5 meters distance to others.
In the end there have been emerged several main activities. Netflix, learning Czech (what I actually started already before Corona), biking and of course photography.

In the second week of our work scheme I was thus highly motivated to make some new pictures for which I seldom took time before. Especially in landscape photography the worthiest times are around sunrise and sunset. And well, from spring it means getting up early. Yeah, I know, what I just said.
But: Afterwards I see what I have done and I can put myself back to bed.

Therefore I took one of my free days (Tuesday the 24th) and went the same direction as always. To Leiden. But the main goal hasn’t been the Science Park but the city centre. After scouting the area the evening before I decided to make the windmill „De Valk“ my main project.

I arrived at around 6 am and while finding a parking spot I have been blessed with one further really beautiful view. Deep red light. Just awesome. I wanted to catch it first and stopped because I knew I would get it right now or never. I went over to the only interesting point where I could put my cam and had to realize that this would cause a fight. A goose family showed me its intention to protect the children. So I took the step back to my former plan.

At a supermarket I finally placed my car and made the rest with my electrical scooter. Arrived at the mill the sun was already way higher but didn’t rise completely, yet. It is always going quite fast during those daytimes and so I had to hurry a bit. But it went well. I tried different perspectives but in the end one was my favourite.

I went further to a bridge closeby, made some shots and decided to go once again to the spot from the beginning. I asked myself if the family was still there. Well, it moved a bit and so I saw a chance. Of course I could not get that amazing red anymore but maybe it could still become something nice.

But still it appeared that I won’t be alone. There was a couple of geese that still wanted to defend the territory. Especially she was complaining. It became a serious discussion in between. She tried to impress me several times and everytime I let myself look a bit vulnerable, she wanted to come over to me. And I resisted. In the end she accepted that I won’t go. At least not for the next 15 to 30 minutes. I made my pics and was thinking, if there was more or if I should go home.

I left the geese and recognized another thing. I didn’t know if it was worth it but I wanted to find out. The Morspoort with its bridge. A beautiful historical place in Leiden. Not that Leiden had more than enough them but this one is very fine. The light still made something possible and a nearby laying house boat seemed to be attractive both as point of view and foreground. I made one more long exposure. First to flatten the water, second to keep it free from passengers. It became kind of busy. Which was fortunately not very much during Corona.

Afterwards I really decided to go home again. I was freezing a bit and was hungry. On my way to the car I had to pass some more geese. One of them found again I came to close and was hissing against me. But it calmed down again as it recognized that I did not want to stay.
Serious guys those geese. 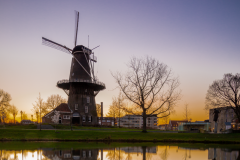 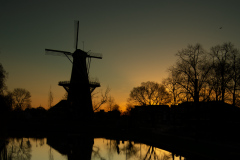 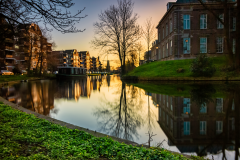 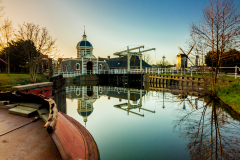